Let us be your personal gateway to exploring extraordinary Crete, and create most memorable experiences for you and your family…

CRETE is the largest island in Greece and the fifth largest in the Mediterranean Sea, where locals share their traditions, wonderful cuisine, generous spirit and authentic hospitality. At its four regions, Chania, Rethymno, Lasithi and Heraklion, you can admire the remnants of brilliant civilisations, explore glorious and splendid beaches, discover ancient treasures and landscapes, uncover vibrant cities and dreamy villages, impressive mountains capes, fertile valleys and steep gorges.

With 300 days of sunshine, Crete is an island of all seasons, offering a multitude of tourist attractions, such as the archaeological sites of Knossos, Phaistos, as well as the Venetian castle in Rethymno, the Samaria Gorge, the Natura 2000 sites of Gramvousa Peninsula and Balos Lagoon. Explore and taste the Cretan natural products coming straight from its blessed land, such as olive oil, honey, raki, herbs, wines and more.

Crete is surrounded by breathtaking beaches, bays, coves and marinas. More than 80 beaches in Crete have been given the Blue Flag award. 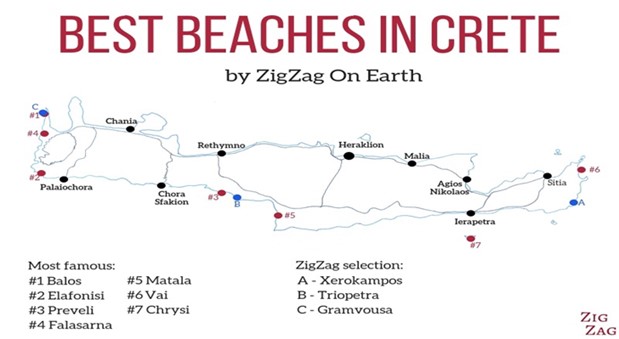 The Prefecture of Lassithi occupies the easternmost part of Crete and has an area of 1,818 square kilometres.

Its population totals approximately 70,000 and the principal occupations are farming, stock-breading and tourism. The main products of the Prefecture are cereals, olive oil, olives, carobs and currants. There are two theories as to the origin of the name "lassithi": the first relates it to the ancient Greek word "lasios", which means fertile area - and indeed Lassithi has been verdant since ancient times - while the second, attributed to Paul Favre, relates the name to Sitia, which the Venetians rendered "La Sitti". The capital of the Prefecture is Agios Nikolaos, an attractive harbour standing on a deep bay.
Lassithi of today, consists of villages of true-born Cretans who retain the tradition of hospitality. It also consists of small beautiful towns with cosmopolitan character, night-life at bars and clubs as well as open-air cinemas. It holds shops with jewellery and silverware, fabulous furs and works of popular art, along with local markets offering fruits and grapes from the earth, such as bananas, oranges, melons, figs, as well as thyme honey and famous cheeses.

Tastes and fragrances remaining unforgettable.
Lassithi, is the destination with unique beaches, some secluded, others organized and social (having been awarded with 32 Blue Flags) and ideal for water skiing, sailing, wind surfing, snorkelling or underwater fishing.

Spinalonga
The most famous island on Crete, especially after Victoria Hislop's bestselling novel "The Island". This rock stronghold and fortress is located on the north-west entrance of The Bay of Elounda. The fortress was built during Venetian times using building material from an original ancient fortress. It was founded in 1579 by the Venetian benefactor Luca Michiel, as shown by the inscription on the lintel over the main entrance. It was part of the organization of the defense of Crete, particularly against the expansion of the Turks and the incursions of pirates.

When the Venetians were defeated and surrendered the remainder of Crete to the Turks, Spinalonga alone remained outside of their control. From 1669 until 1715, it was a refuge for Venetians, Hainidons and escapees. Subsequently until 1903, it was inhabited almost exclusively by Muslims and when these last residents left, the place became a leper colony by order of the Greek government.

This operation was concluded in 1957, and from then on it has remained uninhabited at the mercy of time until recently, when restoration of its buildings has commenced. The public buildings, the houses and the surrounding wall which are being restored, revitalize the history of the island and celebrate the magnificent beauty of the fortress, the island itself and the entire landscape.

Heraklion constitutes an alloy of different and unique elements more than any other prefecture of Crete, justifying its characterization as the prefecture of contrasts. Its location in the centre of Crete has determined to a large extent the concentration of the main economic and administrative operations, as well as of the population of the island in the capital city, Heraklion. The city that assembles the one third of the population of Crete is a representative sample of the Cretan culture, mixed with all the expressions and operations of a modern urban centre, since it constitutes at the same time the main commercial harbor of the island and the centre of education, telecommunications, research and technology.

The city of Heraklion has influenced its neighboring regions by determining, inter alia, the developmental of settlements as Gazi, Alikarnassos, Gouves, Malia and Hersonissos that are linearly unfold, at the length of the northern coasts of this prefecture. However, from this northern axis and southerly, the modern character of the big cities still could not inoculate the culture of centuries that is well safeguarded thanks to the terrene. The prefecture is expanded in West up to the sub mountains of the legendary Mountain of Idi, in East up to the foothills of the precipitate mountains in Lassithi, while in South it is girded by the mountain range of Asterousia and Kofina. The hinterland is delimitated by two places that have constituted the setting of great cultures: the anthropomorphous mountain of Giouhta in North and Messara, the largest and most fertile plain of the island in South West. In the centre, the plateaus of the prefecture are cracked by the ravines and the valleys, engraved by the streams and rivers flowing from the mountainous volumes towards the southern coasts of the prefecture.

The variety of landscape at the prefecture of Heraklion reflects the built-up structure and the social-cultural web that were shaped accordingly. Sometimes we meet villages hooked on the tall rocks, or frugal stone-built pastoral installations that are hardly distinguished from the grey limestone of the naked mountains; other times we meet scattered monastery dependencies in the middle of extensive vineyards and olive groves, once more groups of new settlements that replace the old ones, balancing between the old and modern world so that their population can be retained; a population that maintains the hospitality mood and cultural creation that has inherited from his ancestors flourishingly and embellishes everyday routine with modern expressions.

Heraklion: The prefecture full of natural and human elements in an innovative harmony that compose a charming vivid present as the sequence of a mysterious and legendary past.

West of Heraklion prefecture lies the prefecture of Rethymno, a mountainous area with a long history and tradition. It is covering an area of 1.496sq. km and with population of 86.532 residents. Although the prefecture of Rethymno is the smaller between the four prefectures of Crete, it has plethora of natural beauties, incredible beaches, antiquities and historical monasteries, until traditionally mountainous villages and seasonal settlements to demonstrate. It is divided into four provinces: Rethymno, Agios Vasileios, Amari and Mylopotamos.

Rethymno city, the capital of the prefecture, is found on the north side of the island. Its main income is tourism, the olives, the oil and the livestock farming. Center of Arts and Letters, with a cultural blossom in the 16th and 17th century. A very attractive city, with its old town and castle and with special character which kept from the many civilizations that flourished in the area.

The morphology of the prefecture is mainly mountainous shaping gorges, caves, lush valleys and rivers, as it is bordered in the west by the White Mountains and in the east by Mountain Psiloritis.

Many small, picturesque and unspoiled villages can be found in the prefecture with the people to retain their hospitable spirit and a magnificent inheritance. A remarkable way of living between the past and the present, carrying with their celebrations, music, art and customs. In important smaller towns and villages in the prefecture of Rethymnon (Rethymno), such as Panormo, Anogia, Argiroupoli, Margarites, Bali, Gerani, Ag. Pavlos, Plakias and Agia Galini, you can meet locals, admire they historical monuments and learn the history of this important part of Crete.

The prefecture of Rethymno possesses a plethora of idyllic beaches and secluded coves, famous for their unspoiled beauty and their crystalline waters. The most popular and one of its most beautiful beaches is the one of Preveli which looks like a lagoon with its emerald waters, palm trees and warm sand. Also, wonderful beaches can be found in the areas of: Adele, Agia Galani, Agia Paraskevi, Agios Georgios, Agios Pavlos, Ammoudi, Bali, Damnoni, Episkopi, Gerani, Geropotamos, Mikro Ammoudi, Panormos, Plakias, Platanes, Rethymnon Town, Rodakino and Triopetra.

The prefecture of Chania is the western most division of the island of Crete covering an area of 2376 square km and with a population of 150,387 residents (census 2001).

The prefecture of Rethymno forms its eastern border while the warm waters of the Mediterranean, the Cretan Sea on the north and the Liviko Sea on the south, lap a remaining area of 350 square km of seashore on its three other sides. The majestic White mountain range or Madares with its dozens of peaks, the tallest of all being Pahnes (2454 metres), constitutes the backbone of the prefecture.
The range spans west to east and vanishes close to the prefecture of Rethymno, having formed many plateaus such as Omalos (altitude 1080 metres) and Askifou (altitude 730 metres) and having been divided by wild gorges and ravines of exceptional beauty like that of Agia Irene, Samaria, Arathena, Imbrou and many more along the way. It generously allows a big fertile plain to unfold in the north, fertilizing it with its abundant water sources which transform into life-giving rivers, its biggest being Platanias (ancient Iardano) and Kiliaris.

The plains of Kisamos, Chania, Armeni and Georgioupolis end up in the densely populated and touristically developed beaches of the Cretan Sea. The roughly chiseled shore is characterized by four long peninsulas that share the same names with the promontories of Gramvousa, Irene (Spatha), Akrotiri and Drepanos in between which the four large and accessible gulfs of Kisamos, Chania, Souda and Georgioupolis are formed, the second to last one harbouring the largest and safest port in Greece.

In contrast with the northern division, the White mountain range suffocatingly crams the southern and western seashores into a narrow stretch of arable land with the exception of Paleochora in the west and the plain of Fragokastelo in the east. This has resulted in the southern and western coast remaining sparsely populated and less touristically developed allowing their wild and unspoilt beauty to have remained intact. Besides, the five small inlets in the south, namely that of Paleochora, Sougia, Agia Roumeli, Loutro and Chora Sfakion and the three in the western coast, Livadi, Sfinari and Stomio are not accessible by large passenger ships.

The islands of the prefecture, that of Souda, of Agioi Theodori or Theodorou in the gulf of Chania and Imeri and Agria Gramvousa at the edge of the promontory, which shares the same name, are small and uninhabited.

Gavdos is the exception since it is the only inhabited island of Crete not to mention the southernmost inhabited area of Europe. It is located at a distance of 23 nautical miles from Chora Sfakion and 32 nautical miles from Paleochora. The pefecture of Chania also boasts the only natural lake not only in the prefecture but in all of Crete, namely that of Kournas in Apokoronas, while a smaller artificial lake has been created in Agia of Kydonia for the irrigation of the plain of Chania.